In above ground installations, pipes should be laid on broad, smooth bearing surfaces wherever possible to minimise stress concentration and to prevent physical damage.

PVC pipe should not be laid on steam lines or in proximity to other high temperature surfaces.

Where a PVC pressure pipeline is used to supply cold water to a hot water cylinder, the last two metres of pipe should be made of copper and a non-return valve fitted between the PVC and copper line to prevent pipe failure. Refer also to AS/NZS 3500.4.

Where connections are made to other sections or to fixtures such as pumps or motors, care should be taken to ensure that the sections are axially aligned. Any deviations will result in undue stress on the jointing fittings which could lead to premature failure. If a pipeline is subjected to continuous vibration such as at the connection with a pump, it should be connected by a flexible joint or, if possible, the system should be redesigned to eliminate the vibration.

The pipe must be adequately supported in order to prevent sagging and excessive distortion. Clamp, saddle, angle, spring or other standard types of supports and hangers may be used where necessary. Pipe hangers should not be over-tightened. Metal surfaces should be insulated from the pipe by plastic coating, wrapping or other means.

A build-up of static electricity on the outside surface of PVC pipes can occur. Where there is a risk of explosion, such as in some mining applications, safety precautions may be required.

For either free or fixed pipeline supports using brackets or clips, the bearing surface should provide continuous support for at least 120° of the circumference.

Metal straps used as supports should be at least 25 mm wide, either plastic-coated or wrapped in a protective material such as nylon or PE sheet. If a strap is fastened around a pipe, it should not distort the pipe in any way. 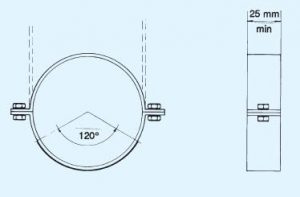 A free support allows the pipe to move without restraint along its axis while still being supported. To prevent the support from scuffing or damaging the pipe as it expands and contracts, a 6 mm thick layer of felt or lagging material is wrapped around the support. Alternatively, a swinging type of support can be used and the support strap, protected with felt or lagging, must be securely fixed to the pipe.

A fixed support rigidly connects the pipeline to a structure totally restricting movement in at least two planes of direction. Such a support can be used to absorb moments and thrusts.

Careful consideration should be given to the layout of piping and its support system. Even for non-pressure lines the effects of thermal expansion and contraction have to be taken into account. In particular, the layout should ensure that thermal and other movements do not induce significant bending moments at rigid connections to fixed equipment or at bends or tees.

For solvent-cement jointed pipe any expansion coupling must be securely clamped with a fixed support. Other pipe clamps should allow for movement due to expansion and contraction. Rubber-ring jointed pipe should have fixed supports behind each pipe socket.

Setting of Pipes in Concrete

When PVC pipes are encased in concrete, certain precautions should be taken:

It is advisable to rigidly clamp at valves and other fittings located at or near sharp directional changes, particularly when the line is subjected to wide temperature variations.

With the exception of solvent-cement jointed couplings, all PVC fittings should be supported individually and valves should be braced against operating torque.

A solvent-cement jointed PVC pipeline will not usually require thrust anchorage, but the designer should take into consideration any stress on the fittings. As pipe diameter or working pressure increases it is good practice to install thrust anchors where necessary. A rubber-ring jointed pressure pipeline requires anchorage at all joints, at changes in direction and at other positions where unbalanced pressure forces exist.

For above-ground installations with solvent cement joints provision should be made in the pipeline for expansion and contraction. If the ends are constrained and there is likely to be significant thermal variation, then a rubber ring joint should be installed at least every 12 m to allow for movement within the pipeline.

The spacing of supports for a PVC pipeline depends on factors such as the diameter of the pipe, the density of the fluid being conveyed and the maximum temperature likely to be reached by the pipe material.

The table below, from AS/NZS 2032, shows the support spacing in metres for PVC non-pressure pipe. These spacing may need to be reduced for pipes exposed to direct sunlight or where increased pipe material temperature may occur. For more information, see AS/NZS 2032.

The table below, from AS/NZS 2032, shows the support spacing in metres for PVC pipe carrying water at 20°C. These spacings do not allow for additional extraneous loadings. These spacings are also acceptable for PVC-O and PVC-M pipes. However, for the same class of pipes, PVC-O and PVC-M will show increased deflection between the supports. Since deflections are very small, this increase will not usually be of functional significance.

If temperatures are in excess of 20°C the horizontal spacing should be reduced by 25% for every 10°C above 20°C. At 60°C, continuous horizontal support is required.

Generally, vertical runs are supported by spring hangers and guided with rings or long U-bolts which restrict movement of the rise to one plane. It is sometimes helpful to support a long riser with a saddle at the bottom.

Where a PVC pipeline is to pass through or is to be built into a floor or wall of a building, allowance should be made for it to move without shearing against any hard surfaces or without causing damage to the pipe or fittings.

An annular space of not less than 6 mm should be left around the pipe or fitting. This clearance should be maintained and sealed with a flexible sealant such as loosely packed felt, a rubber convolute sleeve or other suitable flexible sealing material.

If the pipeline has to pass through a fire-rated wall, appropriate fire stop collars should be installed.