PVC-U pipes have been around for many years now and have found their way into a wide range of applications. Pipe users have acquired a vast amount of experience and know-how when it comes to selecting, handling and installing PVC-U pressure pipes.

In recent years, advances in technology have brought us new, improved PVC materials and manufacturing techniques, which have resulted in the development of PVC-M and PVC-O pipes. The improved performance of these materials has allowed pressure pipes to be manufactured with lower wall thicknesses. This has many benefits, including improved hydraulics and reduced environmental impact.

These new generation pipes use the same pressure class designation system and in many cases, replace PVC-U in the same applications.

However, there are some applications in which the class for class substitution of a thinner wall, new generation product for the traditional PVCU which has performed successfully can lead to unexpected results. These are typically situations where external or other loads, rather than internal pressure resistance, are the primary considerations. Examples include pipes immersed in water, pipes encased in grout or concrete and pipes used for borehole casings.

This technical note is intended to highlight the areas in which the same class PVC-M or PVC-O pipe is not equivalent to PVC-U pipe and guide the user to selecting the appropriate class.

Like most products in engineering applications, PVC pressure pipes are designed on the basis of their mechanical properties and are dimensioned so that stresses in service will not exceed allowable stresses for the material. For pipes which will be subjected to internal pressure, the hoop stress developed in the pipe wall is the main consideration. For a given pipe material, the allowable hoop stress is constant. This means that as the pressure class of pipe increases, the pipe wall thickness must also increase. PVC-M and PVC-O pipes are designed to operate at higher hoop stresses than traditional PVC-U pipes and therefore have a thinner wall for the same pressure class. This is illustrated in the example in the table below which compares minimum wall thicknesses for DN150 Series 2 PVC-U, PVC-M and PVC-O pipes.

In some applications, the resistance to external pressure and lateral loads must also be considered and may dominate the design. The characteristic that determines the pipe’s performance in this respect is its stiffness, which is a function of wall thickness for a given diameter. Because of their thinner walls, the same class of PVC-M and PVC-O pipe will not have equivalent resistance to deflection or collapse as a PVC-U pipe.

Buried pipes, which are surrounded by well placed and compacted soil, derive a great deal of support from the soil. Where the external loads and internal pressure are known or can be predicted, it is possible to calculate the resistance of a pipe for both the supported and un-supported cases. For a more detailed discussion of this, consult Vinidex technical note PVC pipes under external pressure and AS/NZS 2566.1.

However, there are some applications, such as borehole casings in which no such support can be relied upon and the loads on the pipe can be difficult to predict. Pipe classes have frequently been selected based on previous users’ successful experience.

For these applications it is important to select a higher class of PVC-M or PVC-O for the same duty in which a particular class of PVC-U has performed satisfactorily. In some cases, simply going up one class for PVC-M may be acceptable; in other cases more than one class will be required. The figure below provides a chart which allows the selection of pipes with equivalent stiffness to the PVCU pipes to be looked up. To use this chart, look up the class of PVC-U that has performed successfully and then determine the appropriate class of the new generation pipe by selecting the equivalent length bar. 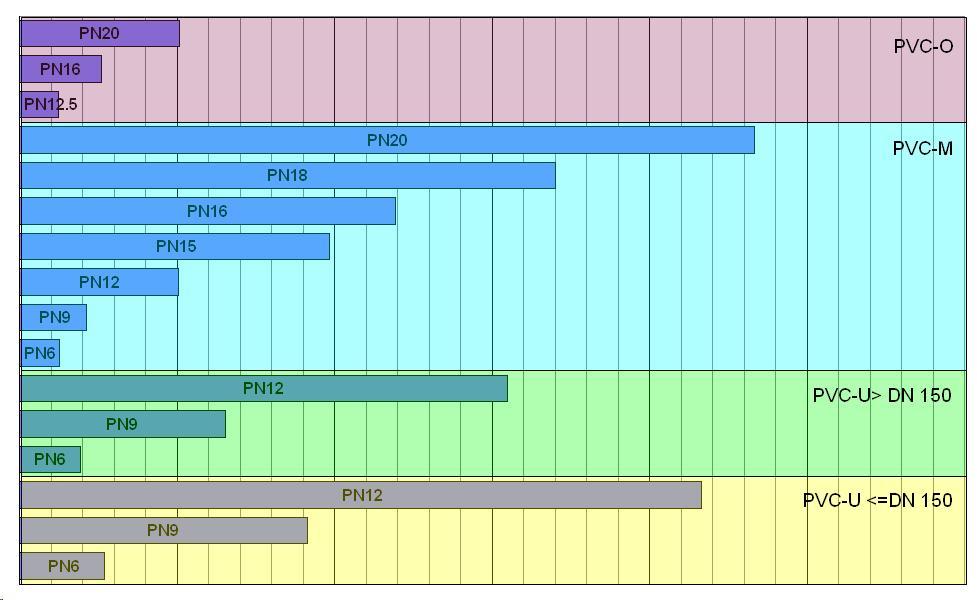