When exposed to outdoors weathering the properties of polymers, such as human skin, timber, and plastics, are subject to change. Primarily, the effect is one of photo-oxidation brought about by incident wavelengths within the ultraviolet range, although additional factors may contribute. In the case of plastics, photo-oxidation may result in loss of impact strength, resistance to slow crack growth, and thermal stability. This is a surface effect, and the bulk polymer is not necessarily affected. Pigment fade may also be a consideration.

This Technical Note addresses end-user performance requirements for short and long term exposure of PE pipes and the means of optimising compound performance.It is not intended to be a treatise on weathering of polymers, the subject being already covered in detail in the literature.

The discussion relates to pipes manufactured in accordance with

Other industries, such as mining, require up to 15 years of exposure during service.

For coloured compounds, stabilisation has not been as effective as carbon black, but the introduction of HALS (hindered amine light stabilisers) has enabled greatly improved UV resistance, albeit still not to the level of carbon black.

Requirements for additives and product performance are included in AS/NZS 4130 and AS/NZS 4131.

Although actual long term performance is not well documented quantitatively, there are sufficient data and long term history of use for black PE pipe grades to assume suitability.

Chevron Phillips Chemical Company LP (1) have exposed black HDPE and MDPE pipe materials conforming with AS/NZS 4131, plus materials with non-conforming carbon black, for over nine years and seven years respectively in Singapore, where incident energy is about 80% of that in Nth. Queensland. These pipes, whilst exhibiting surface oxidation, showed undiminished hydrostatic pressure resistance, even for non-conforming carbon black (50 nm particle size) used for comparative purposes.

Gaz De France(2) reported exposure of pipes for 38 months in the South of France (approx. equal to 24 months in Nth. Queensland) – these were black MDPE pipe grades. Oxidation occurred to a depth of approximately 50μm, which was described as the general order of magnitude for black MDPE gas pipes. Taking into account that surface layers are removed prior to fusion welding and there is a “universal” allowance of 10% of pipe wall for surface damage during handling and installation, the small amount of surface oxidation is negligible.

The development of HALS stabilisers has resulted in significantly improved long term resistance to the effects of UV radiation on coloured compounds. Such compounds are used as pipe identification and may be used as co-extrusions on pipes or for the pipes themselves.

The performance of HALS stabilisers is well documented and acknowledged within AS/NZS 4130 by acceptance of 0.2% of HALS as being adequate for exposure during storage in Australia.

According to Ciba Specialty Chemicals, addition of 0.2% HALS Tinuvin 783 provides life of more than 16000 hours, compared with less than 1000h with nil stabilisation, as measured by carbonyl absorbance of the sample exposed to weathering in Weather-Ometer. 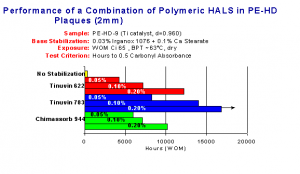 Based on Ciba Specialty Chemicals data, 16000 hours in the Weather-Ometer is approximately equivalent to 12.5 years in Florida. This approximates to more than 10 years of exposure in Australia.(4)

Notwithstanding the fact that artificial weathering cannot be accurately correlated with natural exposure, it can be seen that 16000 hours provides a large margin for two years exposure in Australia.

Further, Cytec Industries Inc. have shown that the addition of HALS additive UV-3346 at 0.2% provides in excess of 30 months to 50% of original elongation to break, compared with 6-9 months for unstabilised material.

In pipe Standards, such as AS/NZS 4130, AS/NZS 4131, and ISO 4437, it is usual to expose pipe specimens, whereas in developmental work on polymers, small specimens are usually chosen, so that the degraded area only is evaluated.

Thus the data presented may be considered conservative, as the bulk material in pipe specimens will lessen the impact of surface degradation.(3)

For long term use of coloured compounds in service, such as the use of white co-extrusions for temperature minimisation, the dosage level of HALS should be increased to maximum compatibility level. For example, Ciba Specialty Chemicals recommend inclusion of 0.4% Tinuvin 783, plus at least 2% of TiO2 rutile.(5) In addition to providing the white colour, TiO2will impart improved UV resistance, although its effect is not as pronounced as with PVC. This will optimise performance for the 15 years required by the mining industry.
However, in order to quantify performance, natural and/or artificial weathering tests should be conducted.

It is known that stabilisers may act in combination with pigments and antioxidants to produce a combined and otherwise unpredictable effect on UV resistance. For example, testing of HDPE by Chevron Phillips Chemical Company LP^(3)^ has shown that for certain yellow pigments, 2% dosage is superior to 1% dosage without stabilisation, but with stabilisation the performance is reversed.

In any case, all coloured compounds should eventually be assessed by natural exposure testing.

Where neither carbon black nor HALS is incorporated, compounds to AS/NZS 4130 and AS/NZS 4131 must be subjected to natural exposure testing.

Exposure testing is usually carried out at a facility located at Townsville, where incident energy is high, resulting in shorter exposure times.

Due to the potential synergistic effects, all coloured pipe compounds should be evaluated by natural exposure testing to a total incident energy level of 14 GJ/m2, but the time period involved is likely to inhibit product development, so an interim acknowledgement of conformance could be granted on the basis of compounds that incorporate 0.2% min. of either Tinuvin 783 or Cytec UV-3346.

Resistance to slow crack growth and impact strength are usually assessed by some form of notched specimen testing. However, as the notching removes the affected layer, these tests are useless.

Elongation to break of compounds that meet all other requirements of the Standards is typically greater than about 700%, so the requirement of 350% minimum is effectively 50% change.

As previously stated, the data used as the basis is developed from small specimens and thus conservative compared with exposure of pipes.

Thermal stability is considered to be of little relevance. Although it relates to pipe life and fusion welding, the former is covered by the tensile and pressure testing, and for the latter, welding techniques require removal of the oxidised layer. Furthermore, it has been demonstrated that the OIT method specified in AS/NZS 4130 and ISO4437 is not appropriate for HALS stabilised materials after exposure and determination of carbonyl index should be made. (6)

Further quantification should be obtained by outdoors exposure testing.